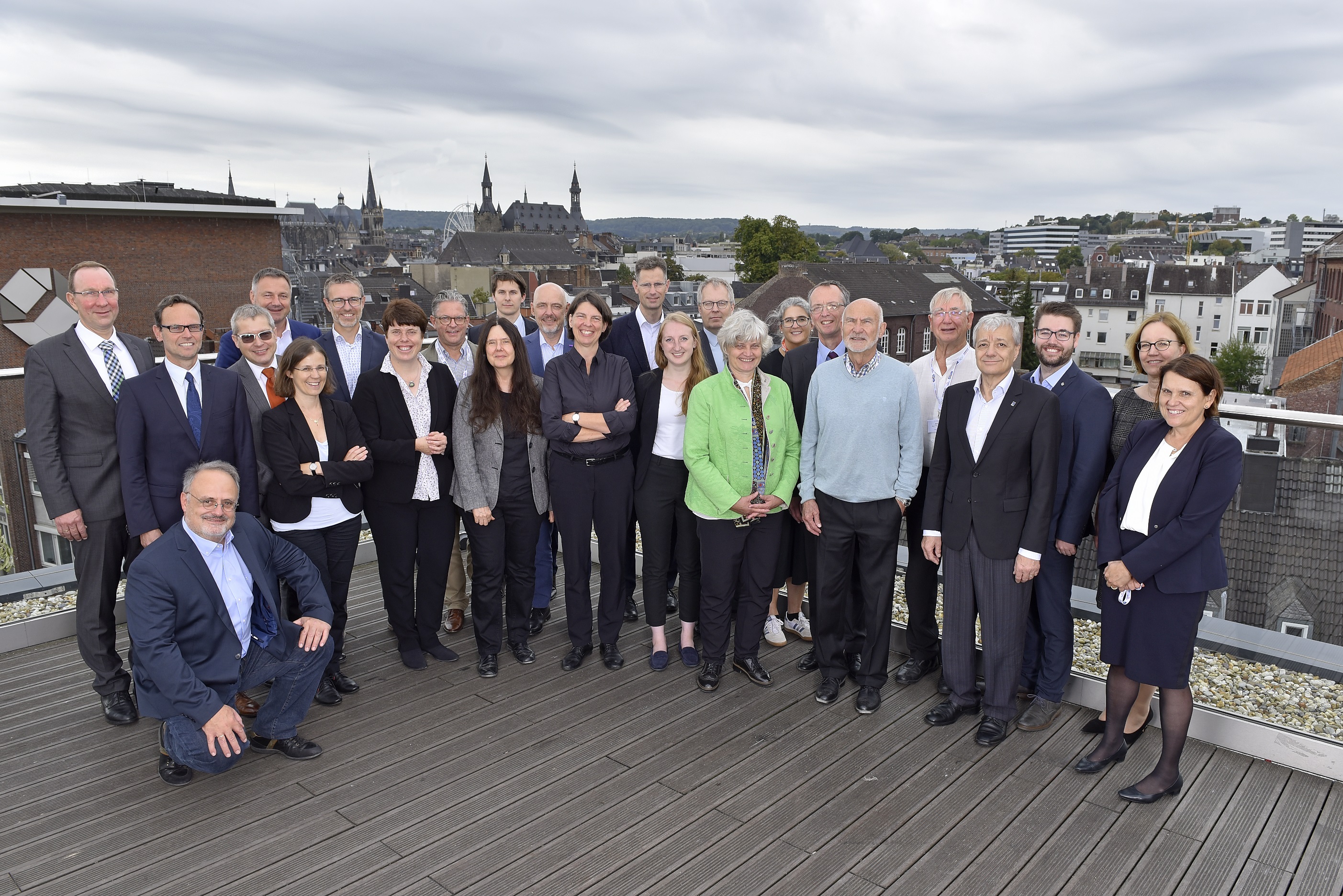 Today it got serious for the first time, Katharina and I were invited together with the other newly elected members to the board meeting of the current GDCh board. From 1 p.m. on we went to a hotel, away from the conference for lunch and afterwards into the closed meeting room. After a group photo and the obligatory signing of various data protection passports, the five-hour working through of the agenda began (who is interested in details?: Link to our report on the public items discussed). In this part Katharina and I (not yet entitled to vote) were rather observers and could only contribute our assessments from time to time. For example, it seemed sensible to us to be able to attend the last board meeting in 2019 in December in order to be able to continue the work of the old board seamlessly from 2020 onwards. Beyond tradition, we were able to secure an invitation to Bergkamen (Many thanks to Mr. Fleßner!). Subsequently, the current Executive Board was adopted, and we newcomers were allowed to take action in the "constituent" meeting to elect the GDCh Presidium for 2020-22. Prof. Peter R. Schreiner (University of Gießen) was elected as the new President, Prof. Stefanie Dehnen (University of Marburg) and Dr. Carla Seidel (BASF) as Vice-Presidents. The election of the vice-presidents is thus based very much on the votes of the members during the election of the Board of Executive Directors, as both candidates received the most votes on their lists. Dr. Timo Fleßner (Bayer) was appointed treasurer and thus to the Board of Executive Directors.

*the memory report was written from a subjective point of view by Frank D. and Katharina U., the official minutes will be published in the Nachrichten aus der Chemie  issue XY 2020 after approval in the December meeting of the Board.

According to the statutes, the executive committee is only the second highest organ, the highest decision-making organ of the GDCh is the annual general meeting, whose meeting is prepared by the executive committee. Therefore, at this point many thanks to those who followed our call and took part in the general meeting in Aachen. A strong representation of the JungChemikerForum at these meetings is enormously important to represent our interest and commitment to the GDCh.

Has been prepared and confirmed.

The highest distinction in the GDCh is honorary membership. Applications are discussed and voted on in the board. According to the statutes, outstanding supporters of chemistry and the goals of the society are appointed, who have made an outstanding contribution to science and to the development of the GDCh.

This year, the Board has decided against the appointment of new honorary members.

Report of the President from the Strategy Development Process

During the last few years, the Board has headed a task force on strategy development and defined mission statements for the GDCh, which will be presented at the General Assembly.

From the membership came the application that the executive committee should deal more extensively with the contribution order. This was planned for 2020 anyway.

2) Strategy Discussion of the Board of Directors

Unfortunately, every now and then there will be discussions and topics in the Executive Board that we are not allowed to communicate, even if we stand up for the highest transparency of the meetings. All members of the board of directors must submit to discretion until an official statement is issued. We ask for your understanding.

Here many different topics were discussed (e.g. appointments in selection committees or presentation of the website FaszinationChemie.de), the most relevant one’s for you we have commented here again.

The GDCh and the Equal Opportunities Commission will introduce a new award. More details will follow soon on the homepage in another article.

The request for a budget extension for the JCF Federal Executive Committee due to increased international obligations is postponed to the December meeting. In principle, there is a broad agreement in the board for the work of the JCF (which has been emphasized and praised several times!!). However, the proposal must be elaborated more precisely in order to satisfy the principle of equality of the GDCh bodies.

Together with the Working Group we will develop several concepts which will be voted on in the December meeting.

Constitutive meeting of the GDCh Board for the term 2020-2023

For the previous 5 hours we were only invited as guests. For the last half hour, the newly elected board was allowed to vote for the first time. Here is the agenda:

Prof. Peter R. Schreiner (University of Gießen) was elected as the new President. Prof. Stefanie Dehnen (University of Marburg) and Dr. Carla Seidel (BASF) were elected Vice Presidents. The election of the vice-presidents is thus very much based on the votes of the members during the election of the Board of Executive Directors, as both candidates received the most votes on their lists. Dr. Timo Fleßner (Bayer) was appointed treasurer and thus to the Board of Executive Directors.

The first date at the JCF Spring Symposium in Cologne was already confirmed as the meeting dates for 2020. This is the first time a board meeting has been held at a JCF event!